The EU Commission’s DG Energy has published a report prepared by the law firm Philippe & Partners on the licensing and permitting procedures for shale gas projects.

A sample of four EU Member States (FR, DE, SE and PL) is chosen in the report so as to examine the application of the relevant legal framework to shale gas exploration, prospection and production.

“The legal study confirms that there is no immediate need for changing our EU legislation,” EU Energy Commissioner Guenther Oettinger said in a statement published in late January. “This refers to the actual phase of exploration. We take environmental concerns seriously and will continue to monitor the development of shale gas extraction in the EU.

“From our point of view an adequate regulatory framework for early exploration (seismic/test drilling) activities exists taking into account all scrutinized laws and regulations,” according to the study by Belgian-Luxembourg law firm Philippe & Partners.

Most of the relevant EU regulations include flexible mechanisms, allowing the bloc’s nations to adjust their legislation, to regional or local specifics of shale gas exploration and potentially exploitation, it said. 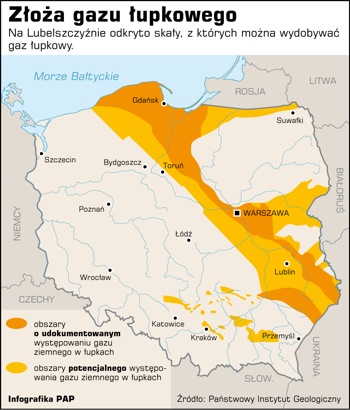 Poland, which is seeking to reduce its reliance on natural gas from Russia, may hold enough fuel trapped in shale to meet its needs for 300 years, the U.S. Department of Energy said in April. Almost 20 companies, including the nation’s dominant gas company Polskie Gornictwo Naftowe i Gazownictwo SA and top refiner PKN Orlen SA, have more than 100 licenses to explore for shale gas in the country, considered Europe’s best prospect for so-called unconventional gas.

Polish shale gas may be as much as 50 percent cheaper than the Russian gas that the country now receives from the Yamal pipeline, paying more than $500 per 1,000 cubic meters, Treasury Minister Mikolaj Budzanowski said on Jan. 19.

While there are no significant gaps in the EU law framework when it comes to current shale gas activities, there’s “no reason for complacency,” says the study. The report also examines the key problem of increasing public participation in the authorisation process for exploration projects.

The Greens group in the EU Parliament released a press release in response to  the publication of the report in which they make reference to  an open letter sent by 9 Green MEPs to EU Energy Commissioner, Gunther Oettinger. The Green MEPs argue that the findings of the report should lead to the proposal by the EU Commission of legislation to address shale gas exploration.