The programme of the Polish Government for its year-long Presidency of the Visegrad Group (comprising of Poland, Hungary, Czech Republic and Slovakia) which commences in June 2012 has been made public on June, 27th.

As mentioned in the introductory remarks below, Poland’s Presidency of the V4 will seek to further streamline constructive regional cooperation for the benefit of an integrated Europe and make the Visegrad Group an increasingly effective advocate of the interests of the Central European EU Member States.

Energy security features in the programme as one of the key cooperation issues identified by the Polish presidency. The question of shale gas extraction will be tackled during the presidency and equally there will be an attempt to build wide-ranging political support for the construction of a North‑South gas transport corridor. 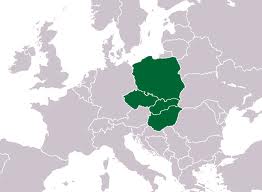 Poland’s 4th Presidency of the Visegrad Group /V4/ (July 2012 – June 2013) comes at a time of serious economic and political challenges for the European Union and globally. We are seeing this difficult period occur almost a quarter of a century after our countries, owing to their solidarity and years of struggle, had torn down the Iron Curtain and overcome the political division imposed on Europe by force, in the wake of World War II. The post‑war decisions foisted on us had divested us of the right to self‑determination and democracy and, consequently, doomed us to ever worsening backwardness and separation from the mainstream of a European civilisation that is founded on a respect for human rights. In a relatively short time, we have managed to not only bridge a significant gap in the distance separating us from the rest of Europe, but also to become responsible and active members of both the North Atlantic Alliance and the European Union. The current, multifaceted crisis – which is both financial and identity‑related – confronts Europe with new challenges and the risk of renewed division of our continent. Criticism of the implemented changes is becoming more pronounced. The Visegrad states, and indeed all of Central Europe, must not remain indifferent to these risks. The global competitive success of our countries – and of Europe as a whole – hinges on the continuation of the ongoing process of reuniting our continent and deepening this unity.

The goal of the Polish Presidency of the Visegrad Group is to further strengthen the position of our countries within international forums and to consolidate the achievements of EU enlargement and the successes enjoyed by the “Central‑European” Presidencies of the Council of the European Union (i.e. the Czech, Hungarian and Polish presidencies). The Visegrad Group has come to epitomise successful systemic transformation, while intra‑group cooperation has been acclaimed as an important, constructive element of the European integration process. In our commitment to the unification of the Continent, we must strive to fashion the European agenda appropriately, defend achievements in the field of civil liberties and freedoms, deepen the single market, continue enlargement policy and expand neighbourhood policy. The persisting crisis hampers consensus building and encourages the revival of national egoisms. The societies of the Visegrad states (the Czech Republic, Hungary, Poland and Slovakia) continue to have confidence in the integration process, despite the problems associated with the crisis, the costs of transformation, and the burdens shouldered by V4 societies in aligning with EU requirements.

As part of its contribution to the continuing integration of Europe, the Visegrad Group will support initiatives designed to enhance the cohesion and internal integration of our region. During the initial period of growth after the fall of the Iron Curtain and accession to NATO and the EU, the Visegrad states altered their socio‑economic structures while comprehensively switching to new avenues of international cooperation. A natural outcome of this was the increase of hitherto artificially obstructed contacts with Western partners, often at the expense of stronger cooperation in the region. Consequently, the region experienced a certain deficit of infrastructural and regional cooperation in the economic, cultural and social spheres, a circumstance which hampers V4 growth and adversely   influences our security, as seen for example in the energy sector.

We should, therefore, place a greater emphasis on improving infrastructure which facilitates contacts between our societies and on further developing our economic, cultural and scientific ties. It is necessary to support exchanges of young people, students and academic staff. We need better understanding between our societies – which remain affected by historical stereotypes – and to make better use of our geographic location to attract new investments, spur economic growth and reinforce national security. We must also make full use in our region of all those factors that bear out the practical value of the Union’s acquis communautaire and the fundamental freedoms of European integration (free movement of goods, capital, services and people). Moreover, greater cohesion and the ensuing stronger cooperation should help to enhance our region’s attractiveness.

International infrastructure connections in the region, particularly along the north‑south axis, are of key significance. In Poland’s view, there is a need for new investments in transport due to the continuing deterioration of existing connections caused by the political changes in the 1980s and 1990s, which gave rise to new hubs in economic and socio‑political relations. The Visegrad Group states will enjoy new opportunities by developing transport routes along the EU’s eastern border and by establishing better links between the Visegrad countries and the other partners in the region, leading in turn to permanent transport connections between the Baltic region and the Adriatic and Black Sea regions.

Our countries’ geopolitical position means that we are natural actors supporting further effectiveness and the sustainability of the EU project, the EU enlargement process and the development of neighbourhood policy. We should enhance our role in the Eastern Partnership area, supporting the development of civil society, the democratisation processes and the approximation to European Union standards. The successful completion of the European integration process in the Western Balkans also requires further transformation, a field where the experience of Visegrad countries can play a key role.

With over two decades worth of achievements, the Visegrad Group reflects the mutual bonds and common interests of countries that possess shared historical experiences and challenges. In recent years, after some ups and downs in the first decade of development, Visegrad cooperation has attained an impressive degree of intensity. This allows the V4 to be increasingly effective in tackling ever more challenging problems linked to globalisation. Owing to this enhanced cooperation, the Visegrad Group – a Central‑European heartland and a role model for other partners, including non‑European ones – has earned its due place in our political, social and cultural awareness and in the planning of economic projects. In speaking of the Visegrad Group, we speak of a community of interests, although we know that this does not mean unanimity. However, it is no less important that the development of Visegrad cooperation has strengthened the EU belief that this cooperation brings added value to regional cohesion and stability, while being beneficial for the EU as a whole. A strong, effective and resolved Visegrad Group successfully strengthens the European Union.

Importantly, the V4 countries – spuriously isolated from the rest of democratic Europe for over half a century – have, since rejoining Europe, markedly augmented the European Union’s growth potential and opened up, before the EU, a better perspective of coping with the challenges posed by globalisation and the rapid changes in the global balance of power. This optimised use of Europe’s potential is becoming a key factor in facing up to the severe aftermath of the crisis – globally and within the EU. The Visegrad Group, demonstrating an ever stronger regional identity in spite of the natural differences between Member States, has become a role model for successful regional cooperation. It is an antidote of sorts to the newly voiced scepticism to integration.

Poland’s Presidency of the V4 will seek to further streamline constructive regional cooperation for the benefit of an integrated Europe. We would like the Visegrad Group to be an increasingly effective advocate of the interests of the Central European EU Member States and to enable these Member States to articulate policy ideas important to the region and the entire EU. The Visegrad Group offers them an opportunity to enhance their sense of participation in European affairs and to highlight the EU‑wide political significance of Central European cooperation. Essential factors will include communication, new ways to synchronise the pursuit of V4 interests, and emphasis on the objective community of these interests and the role of broadly conceived regional and V4 cohesion. The V4 should, among other things, strive for the adoption of the maximum number of solutions by the entire EU – not just the eurozone. We count on the opportunity to highlight V4 needs during the Cypriot and Irish Presidencies of the Council of the European Union.

During Poland’s V4 Presidency, we would like Visegrad cooperation to help build a regional community of countries. It will thus be necessary to step up actions for stronger contacts between our societies and to promote and disseminate the culture and history of Central European states through educational and scientific projects, conferences, scholarships, grants and youth exchanges. The International Visegrad Fund (IVF) will play an indispensable role here.

We wish to push ahead with the good examples set by past Presidencies and build on their experiences. We aim to include other partners in our cooperation to the furthest possible extent, based on the proven “V4+” format. This will help to further consolidate the achievements of the enlargement process and to harness the potential of Central‑Eastern Europe with a view to boosting European integration.